skip to main | skip to sidebar

From Wikipedia, the free encyclopedia
Personal space is the region surrounding each person, or that area which a person considers their domain or territory.
[1] Often if entered by another being without this being desired, it makes them feel uncomfortable. The amount of space a being (person, plant, animal) needs falls into two categories, immediate individual physical space (determined by imagined boundaries), and the space an individual considers theirs to live in (often called habitat). These are dependent on many things, such as growth needs, habits, courtships, etc. Hall's spacing models, to note, were themselves based on Heini Hediger's 1955 psychological studies of zoo animals.[2]
Diagram of Edward T. Hall's personal reaction bubbles (1966), showing radius in feet
Overview
Two people not affecting each other's personal space.
Reaction of two people whose personal space are in conflict.
Personal space is highly variable. Those who live in a densely populated environment tend to have smaller personal space requirements. Thus a resident of
India may have a smaller personal space than someone who is home on the Mongolian steppe, both in regard to home and individual. For a more detailed example, see Body contact and personal space in the United States.
//Body contact and personal space in the United States
From Wikipedia, the free encyclopedia
The personal proximities generally utilized by Americans according to Edward T. Hall.
Body contact and personal space in the
United States shows considerable similarities to that in northern and central European regions, such as Germany, the Benelux, Scandinavia and the United Kingdom. The main difference is, however, that Americans like to keep more open space in between themselves and their conversation partners (roughly 4 feet (1.2 m) compared to 2 to 3 feet (0.6–0.9 m) in Europe).[1] Greeting rituals tend to be the same in these regions and in the United States, consisting of minimal body contact which often remains confined to a simple handshake. In 1966 Anthropologist Edward Hall identified four different zones of personal space Americans like to keep around them:[2][3][1]
Intimate distance: extends roughly 18 inches (46 cm) from the individual and is reserved for family, pets and very close friends. Displays of affection and comforting are commonly conducted within this space. The only strangers an individual typically accepts within his or her intimate space are health care professionals.
Personal distance: extends 1.5 to 4 feet (0.46–1.2 m) is reserved for friends and acquaintances. A handshake will typically place strangers at least 2 to 4 feet (0.61–1.2 m) apart, preserving the personal distance.
Social distance: extends from about 4 to 12 feet (1.2–3.7 m) and is used for formal, business and other impersonal interactions such as meeting a client.
Public Space: extends more than 12 feet (3.7 m) and is not guarded.
Secret Service agents will commonly attempt to ensure 12 feet (3.7 m) of open space around dignitaries and high ranking officials. 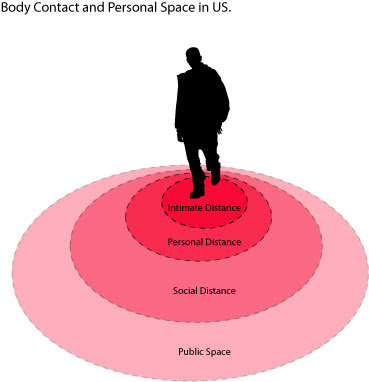 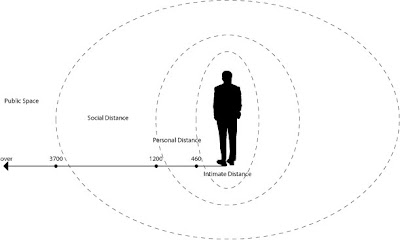 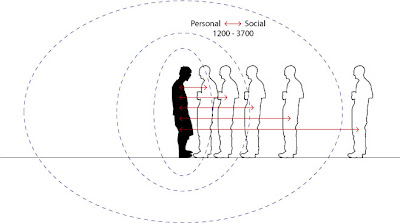 References
^
a b "Edward Hall, the hidden dimension online abstract". Retrieved on 2006-12-14.
^ Thompson, William; Joseph Hickey (2005). 'Society in Focus'. Boston, MA: Pearson. 0-205-41365-X.
^ Hall, Edward (1966). The Hidden Dimension. New York, NY: Peter Smith Publisher Inc. 0-385-08476-5.
Retrieved from "
It can be determined on a
habitat level by profession, livelihood, and occupation. Personal space can also be heavily affected by a person's position in society, with the more affluent a person being the larger personal space they demand. While it is highly variable and difficult to measure accurately the best estimates for personal physical space place it at about 24.5 inches (60 centimeters) on either side, 27.5 inches (70 centimeters) in front and 15.75 inches (40 centimeters) behind for an average westerner. 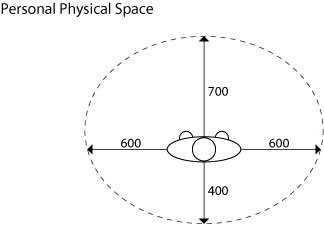 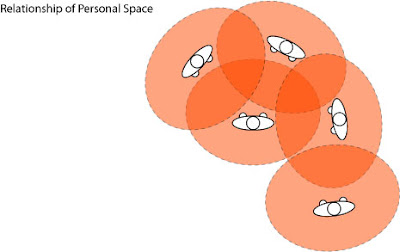 People usually make exceptions to, and modify their space requirements, when they see an immediate need or reason to temporarily allow a change in their usual personal space needs. Often a person's comfort zone is different depending upon where they are and who they are with. In certain circumstances people can accept having their personal space violated. For instance in romantic encounters the stress from allowing closer personal space distances can be reinterpreted into emotional fervour. Another method of dealing with violated personal space, according to psychologist Robert Sommer, is dehumanization. He argues that (for example) on the subway, crowded people often imagine those intruding on their personal space as inanimate. Differences in personal space distances by culture (such as a person from India attempting to talk to someone from the Midwestern US) can often cause situations where one person steps forward to enter what they perceive as a conversational distance, and the person they are talking to reflexively steps back to restore their personal space.
Attitudes of people regarding someone else entering their personal space may depend on the sex of both people. Some train cars are women-only, to allow women to avoid men entering their personal space, providing
privacy, and safety from the possibility of being groped. Changing perceptions about personal space and the fluctuating boundaries of public and private in European culture since the Roman Empire have been explored in A History of Private Life, under the general editorship of Philippe Ariès and Georges Duby, published in English by the Belknap Press.
Neuropsychology further describes personal space through three subdivisions which denote the 'near-ness' to ones person. 1. Extrapersonal Space: Extrapersonal Space refers to all space that occurs outside the reach of the individual in question. 2. Peripersonal Space: Peripersonal Space refers to all space within reach of any limb of the individual. Thus to be 'within-arm's length' is to be within one's peripersonal space. 3. Pericutaneous Space: Pericutaneous Space refers to the space just outside our bodies. It is generally accepted that the visual-tactile perceptive fields overlaps in the pericutaneous space, such that in example, one might see a feather as not touching themselves, but still feel the inklings of being tickled when it hovers just about their hand.[3] 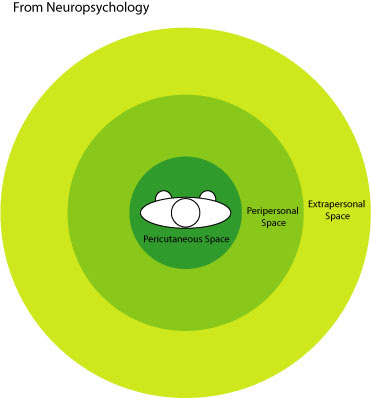